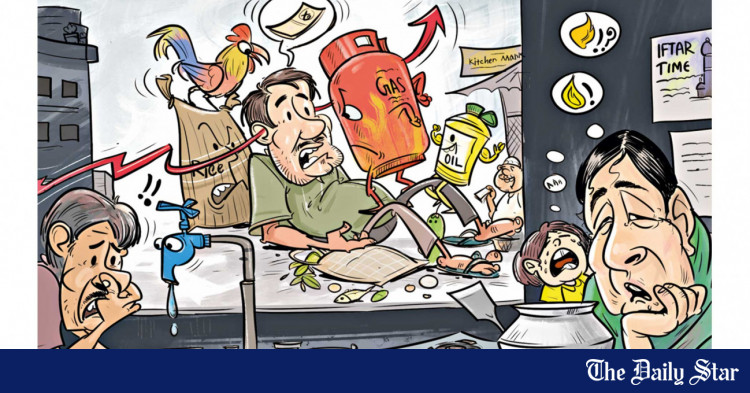 Dear ministers, how long will you laugh at our misfortunes?

It is quite understandable that the public reacts to our foreign minister’s assertion that we are in “heaven” (compared to citizens of other countries) when the whole world is going through a financial crisis. Especially since the price of a dozen eggs went from 130 Tk to 180 Tk on the same day he made this comment, and the price of a kg of chicken went up to 200 Tk. At this point, people are visibly confused, wondering who exactly is in “heaven” and who should burn in hell.

Whether they like to admit it or not, it is easy to see that the government is currently under immense pressure on many issues. On the one hand, there are elections approaching. On the other hand, there is black money floating everywhere, accompanied by unlimited corruption, uncontrollable markets, exorbitant prices for fuel and basic necessities, an alarming increase in the price of the dollar and the stifling of rising inflation. All of these elements combined have increased the cost of living by up to 50%, cornering and suffocating most people in Bangladesh.

For all the latest news, follow the Daily Star’s Google News channel.

Yet our ministers seem to have retained their penchant for humor. What is devastating, however, is that their “humor” is based on people’s suffering. The other day, the LGED Minister said: “I don’t think we are in too bad a state – everyone has clothes on their backs.

In response to this remark by the minister, a farmer based in Rangpur rightly asked, “Do we now have to walk around naked to express how bad our condition is? This farmer has to buy seeds and fertilizers at higher prices because transport costs have increased due to rising diesel prices, aggravated by electricity and water crises and lack of rain. He struggles to support his family of six. However, based on the minister’s comment, and given that they all have clothes and sandals to wear, are we to assume that this farming family is well off?

Meanwhile, our Minister of Planning has taken the jokes about the suffering of the people one step further. “No one has died as a result of the price hike yet; hopefully no one will,” were his exact words. Do you have to die to make the authorities understand the seriousness of your situation? If the country’s Minister of Planning is so oblivious to the terrible crises the people face every day, then what exactly is he basing his plans on?

The honorable minister could have meant that people are not yet starving or starving. But does he ignore that people can still “die” even before turning into corpses? What about the death of dreams and the death due to the deterioration of the standard of living? What about the mother who is unable to feed her child three meals a day? What about the dad who’s sinking deeper and deeper into debt as he tries to make ends meet? What about families who are on the verge of becoming homeless, unable to pay their rent on time? Surely they know how to “die”.

Prices for basic necessities and the cost of living have skyrocketed to the point that even middle-income families are now in a constant state of distress. As the cost of living increases, people’s income does not increase accordingly. The impact of these financial struggles on people’s mental health is worse than death for many. For people on fixed incomes, the main challenge is to make ends meet by cutting expenses as prices keep rising. Ordinary people are not accustomed to making such calculations. All they want is to have two full meals a day and live safely with their families. Therefore, when the prices of daily necessities suddenly soared to an abnormal level, these people were pushed to the brink. On top of that, the authorities seemed completely unprepared, nor were there any warnings or discussions.

Is the government not aware of the plight of low and middle income groups? Did they not take that into account at all when they raised the price of fuel? Not only have they been totally inconsiderate, but they seem to not care about people’s fates. The irresponsible comments made by our ministers not only tarnish the image of the government, but also create resentment among citizens.

Amid the crisis, former minister and incumbent MP Rashed Khan Menon said the government had swallowed poison by agreeing to IMF terms and raising oil prices. But the reality indicates that the poison was in fact swallowed by the people of the country. The government must explain why we need the IMF loan, where and how the money will be invested, the interest rates, when and how the government plans to repay the loan, and how much of its burden will fall on the citizens.

In 2012, when the IMF lent Bangladesh $1 billion, it attached many conditions. As part of the conditions, the government had to amend the entire Banking Corporations Act in 2013. The Bangladesh Bank had to amend its lending policies (The star of the day).

It seemed rather easy for Bangladesh Bank officials to say that the global financial crisis caused by the Russian-Ukrainian war had affected the businesses of many borrowers, for whom they had been unable to repay their loans. But that’s not where the problem ends. Some of them deliberately delayed repayment, while others intend not to pay at all.

While senior government officials were busy keeping the situation away from ordinary people, we also learned that 650,000 crore of Tk had been smuggled out of the country in the past 10 years. But no government official has commented on this phenomenon, although the abnormal rate of money laundering, the highest record of delinquent loans and the suffering of citizens are all linked by a common thread.

Yet we, the general public, are the only ones directly affected by these issues. And those who send all this money to Swiss banks are responsible for our perils. Other countries have requested information about the clandestine transfer of their money to the Swiss bank, which they have also received.

However, our government says it was unable to obtain the information. On the other hand, the Swiss ambassador to Dhaka, Nathalie Chuard, said that Bangladesh did not request any specific information on this matter. Foreign Minister AK Abdul Momen claimed Chuard’s statement was “false”.

The question remains whether Bangladesh really wants to know the details regarding the money laundering or not. According to the annual report of the Swiss central bank published in June this year, the amount of money deposited by Bangladeshis in their banks increased by 55% in 2021. Following this report, the High Court finally asked the question of whether our government had actually sought information regarding money laundering.

“Money laundered for the benefit of Swiss banks is nothing but an exaggeration,” former finance minister AMA Muhith said when asked about it. “I don’t have a list of money launderers,” the current finance minister said recently. Who should we, the inhabitants of “heaven”, believe?

What does an ordinary citizen have to do with expressions like GDP growth and deficit? They don’t understand these complex calculations filled with jargon. What they understand is the rising prices of basic necessities. Their good days are coming to an end as price increases will directly affect their disposable income.

The debate over Bangladesh’s real GDP is not new. It was further fueled during and after the peak of the Covid-19 pandemic. The data provided by the Bangladesh Bureau of Statistics (BBS) has come under scrutiny. What’s interesting is that we still make GDP look higher while making inflation look much lower. The problem is that while an exaggerated GDP won’t have much of an impact, an inflation rate that looks lower actually has negative impacts that can be felt directly by people.

Forget all the other countries. At least 27 people have died while demonstrating against the fuel crisis and rising prices in Sierra Leone, a poor country of eight million people. Meanwhile, 140 million of us – people from low- and middle-income backgrounds – are sitting on our feet while bearing the brunt of rising prices and inflation. We burn in hell, trying to convince ourselves that we really could be in “heaven”.

Shahana Huda Ranjana is Senior Coordinator at the Manusher Jonno Foundation (MJF). The opinions expressed in this article are those of the author.