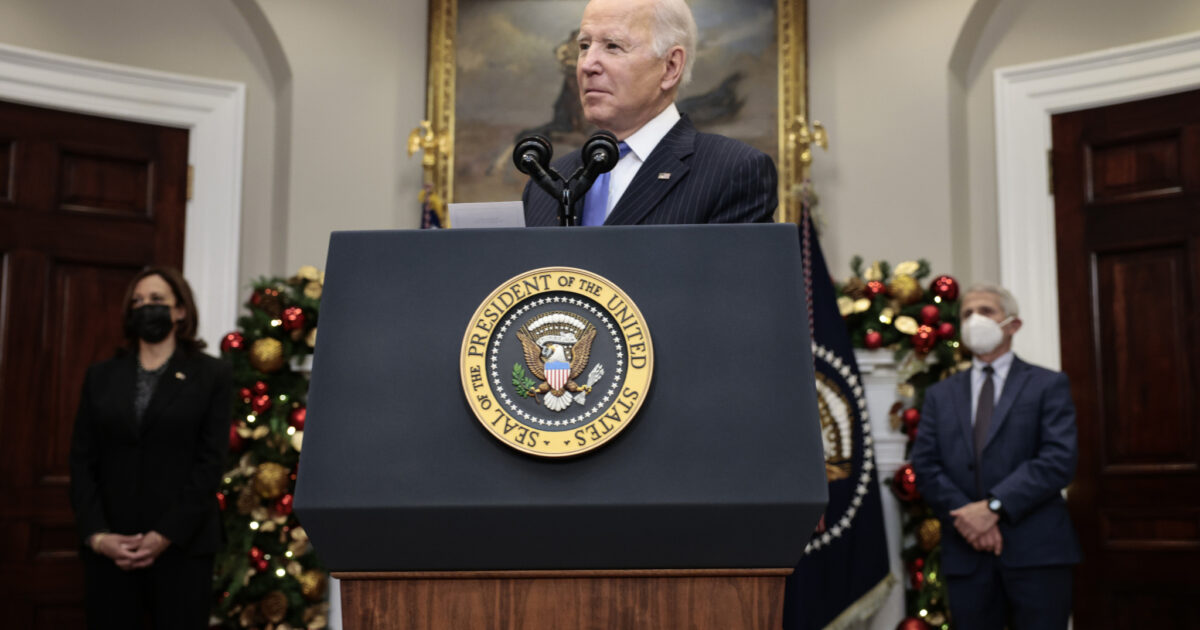 In November 26, as news of the new Omicron variant of Covid-19 raised alarm around the world, the White House issued a statement calling on countries to support an intellectual property waiver for Covid–19 vaccines.

“I call on the nations gathered next week for the ministerial meeting of the World Trade Organization to take up the American challenge to give up intellectual property protections for Covid vaccines, so that these vaccines can be manufactured in the world â€, said President Joe Biden. “I took on this position in April; this news today reiterates the importance of moving forward quickly.

However, this public statement, which made headlines, stands in stark contrast to what the Biden administration did – or did not do – behind closed doors at the WTO in November. 29.

At an informal meeting of the Council on Trade-Related Aspects of Intellectual Property Rights (TRIPS), the body that determines global intellectual property rules, the United States declined to take strong action to approve a intellectual property waiver, and simply referred to remarks President Biden made in November 26. While the Biden administration has publicly declared its support for any IP waiver, it has not clarified whether it supports the specific proposal presented by South Africa and India in October. 2020, nor clarified what changes he would like to see. The effect, global health activists say, has been a slowdown in negotiations, in a context where delay means more lives lost. Instead, these activists say the United States could use its power at the WTO to pressure its allies to stop blocking negotiations and call a General Council meeting to adopt a waiver.

Global health activists claim Biden administration inaction in November 29 shows that there is a disconnect between what the White House says politically and what it actually does on the ground.

The developments were revealed in a November summary 29 meeting of Geneva-based trade diplomats which was obtained by In these times. (The meeting was closed to reporters.) According to the document, the role of the United States in the meeting can be summarized as follows:

The United States referred to President Biden’s recent statement in favor of waiving intellectual property protections for Covid-19 vaccines, given the urgency of the pandemic and the recent development of a new variant. Therefore, the US said it would continue to engage with members to seek areas of convergence that can lead to a solution.

Global health advocates say the Biden administration merely referring to its previous statement is insufficient to adopt an intellectual property waiver with the urgency it demands. “The United States hasn’t said much, â€according to Sangeeta Shashikant of the Third World Network, a global research and advocacy organization based in Geneva. “What strikes me is that at the political level they are saying one thing, but the technical team sees their role as that of facilitating the discussions. There seems to be a disconnect between what the Biden administration can say and what can happen in reality. (“The Technical Team” refers to the delegates who represent the United States trade representative to the WTO.)

In October 2020, India and South Africa have presented a proposal to suspend key intellectual property rules at the WTO, so that countries in the South can access cheaper generic versions of Covid-19 vaccines and treatments. The measure is called a TRIPS waiver, a reference to the WTO TRIPS Agreement, which establishes international rules around patents. Since its introduction, the proposal has garnered the support of more than 100 countries, as well as the main human rights organizations.

In May of this year, U.S. Trade Representative Katherine Tai said the Biden administration “strongly believes in intellectual property protections, but in the service of the end of this pandemic, supports the renunciation of these protections for Covid-19 vaccines. â€However, the administration did not say whether it supported the India-South Africa proposal as it stood, and reports from In these times in September revealed that the administration had refused to support the proposal at a previous meeting of the WTO’s TRIPS Council.

Advocates say they are frustrated by the Biden administration’s lack of meaningful action since the May announcement – and that developments at Monday’s TRIPS Council meeting are consistent with that pattern.

Burcu Kilic, research director of the Public Citizen’s Global Access to Medicines program, a watchdog, shares Shashikant’s frustration. “What is the American position? Are they supporting or opposing the waiver as is? If they oppose it, what are they supporting? It’s been over seven months and we still have no idea where the United States stands, â€she said. In these times.

According to Kilic, the Biden administration could do a lot at the moment. “They should support the waiver as is, â€she said, referring to the proposal put forward by India and South Africa.

She adds, “They could convene a meeting of the General Council to have it adopted. Decisions will be made by General Council, so ideally Biden would call on the CG to pass the waiver – the proposal as it is. Because nobody knows what the American proposal is.

U.S. involvement is critical, activists say, because of the incredible power they wield at the WTO, where they could pressure the European Union, the United Kingdom and Switzerland to stop blocking the proposed TRIPS waiver.

According to the summary, those countries maintained their opposition to the waiver during Monday’s meeting. “The European Union again spoke of a high level of engagement and possible areas of convergence and said the right approach after the MC12 [WTO Ministerial Conference] the postponement is to continue to explore areas where landing zones can be found, â€the summary said. (This ministerial has been postponed indefinitely due to concerns over the danger the Omicron variant poses to world leaders.)

“The UK said that despite MC12 postponement, the commitment to achieve a pragmatic and tangible result remains and that everyone’s collaboration is the way forward, as the tone of recent discussions has shown, â€the summary said.

“Switzerland has recognized the challenge facing the world to achieve the common goal of ensuring global, equitable and rapid access to vaccines and drugs against Covid-19 and stressed that the protection of intellectual property will also be decisive in combating the new variant of the coronavirus and future pandemics, â€the document said.

The effort to adopt a TRIPS waiver has taken on new urgency in light of the new Covid-19 variant known as Omicron. World Health Organization (WHO) says Omicron variant poses problem “very high risk to the world due to its large number of mutations, although questions remain about the severity and transmissibility of the variant, as well as the efficacy of existing vaccines against it.

A key argument among countries supporting the waiver is that without global access to Covid-19 vaccines, the virus will continue to replicate in an uncontrolled manner, leading to new variants that threaten the whole world.

At a meeting of the TRIPS Council in February, which oversees the intellectual property rules of the WTO, South African Ambassador Xolelwa Mlumbi-Peter argued that such a waiver is essential to protect against the news. variants and bring global pandemic relief. “We know this goal is only achievable when everyone, everywhere can access the health technologies they need for Covid-19 detection, prevention, treatment and response, â€she said. “This is a goal that WTO members have repeated over and over in their statements. Now more than ever, international cooperation and solidarity are vital to restoring global health security, now and in the future. “

Since the TRIPS waiver was proposed in October 2, 2020, more … than 4 million people around the world have died from Covid-19. Many countries in the south of the world – India, Brazil, Thailand, South Africa, Argentina and Indonesia – have the national capacity to start manufacturing mRNA vaccines, if pharmaceutical companies like Pfizer and Moderna shared vaccine recipes and a technical know-how, New York Times reported in October.

Delegates from India and South Africa reiterated these concerns at Monday’s meeting. The summary states, “India also regretted that what the co-sponsors have supported from the start has come true. We have always argued that unequal access to vaccines would lead to the rise of variants that could be more transmissible, more deadly and bypass the effectiveness of existing vaccines, so how long can WTO members they wait and at what cost to start text-based negotiations, asked India.

“South Africa â€, the document states, “went on to say that the failure to agree on a multilateral outcome to remove barriers to intellectual property, coupled with the imposition of restrictions on some countries that go against the advice and guidance of the WHO, casts a dim light on the capacity of the WTO to act in solidarity during an international emergency.

Get ready for the opening of the Nasdaq on December 2