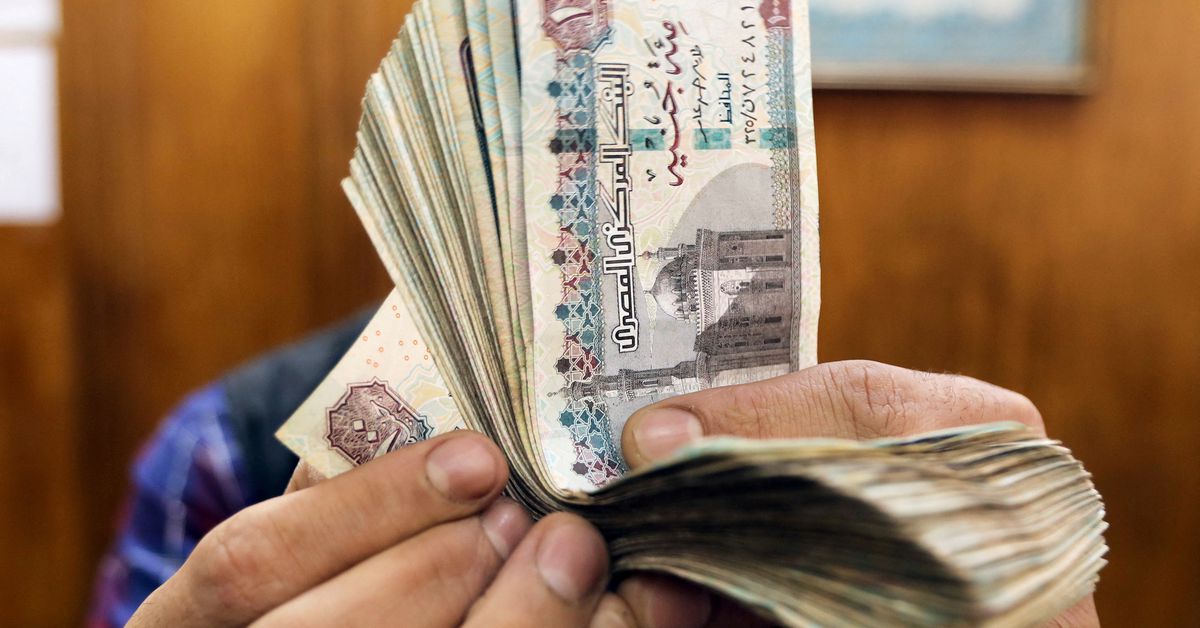 CAIRO, Oct 27 (Reuters) – The Egyptian pound fell 13.5% to a record low against the dollar on Thursday as authorities announced a $3 billion deal with the International Monetary Fund with a commitment in favor of a “sustainably flexible exchange rate regime”.

Egypt had been in talks with the IMF for a new loan since March after its economic difficulties worsened due to the war in Ukraine. The fund has long urged Egypt to allow greater exchange rate flexibility.

In a statement confirming an expanded financing facility of $3 billion over 46 months, the IMF said a flexible exchange rate regime should be “a fundamental policy to rebuild and safeguard Egypt’s long-term external resilience”. term”.

He said the deal was expected to catalyze a major multi-year funding package, including around $5 billion in the fiscal year ending June 2023, reflecting “broad international and regional support for Egypt.”

Egypt’s central bank said it intends to step up economic reforms and has “moved to a sustainably flexible exchange rate regime, letting the forces of supply and demand determine the value of the EGP against other foreign currencies”.

The pound quickly weakened to around 22.75 from 19.67 to the dollar, according to Refinitiv data.

The bank had already let the pound depreciate 14% against the dollar in March, and the currency had fallen more gradually in recent weeks. Former central bank governor Tarek Amer, under whom the pound had long been held stable, was abruptly replaced in August.

Most Egyptian bonds were raised to 2 cents to the dollar on Thursday. , , This left them at their highest level in about a month and up about 10% in price from the lows reached at the start of the month.

IMPACT OF THE WAR IN UKRAINE

The war in Ukraine has pushed up Egypt’s wheat and oil bills while dealing a blow to tourism from two of its biggest markets, Ukraine and Russia, a key source of hard currency.

In its statement on Thursday, the central bank said the conflict had “disastrous economic ramifications” and consequently led Egypt to face large capital outflows.

Annual headline inflation accelerated to 15% in September, its highest level in nearly four years, according to official data.

The central bank said it would continue to announce inflation targets “along the pre-determined disinflation path that began in 2017.” The bank’s current target is 5-9%.

The central bank also said it would phase out a rule by December that mandated the use of letters of credit for import financing.

The rule, an effort to preserve scarce dollars, had caused a major slowdown in imports of everything from consumer goods to industrial components, and left some basic goods stranded in ports.

In order to deepen the foreign exchange market and improve its liquidity, the central bank said it would work to build the foundations of a derivatives market.

Personal loans from 8.9% – Check offers from 24 banks during the holiday season