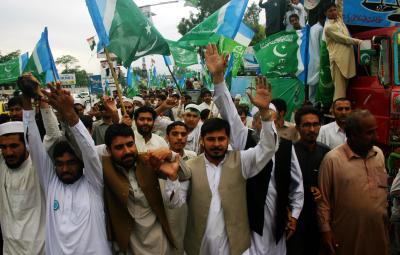 Islamabad, Sep 24 The Jamaat-e-Islami (JI) party is set to hold a nationwide protest across Pakistan on Friday, highlighting the government’s neglect in the face of growing unemployment and inflation in the country.

Political parties across the country are questioning the government’s ability to deliver on its promises, especially as three years have passed since Imran Khan’s government was established and promises have been made time and time again without any visible result.

The JI informed its cadres and regional leaders that the time has come for the party to better understand the plight of the people and to tackle the issues forcefully with the government.

In their assessment, the likelihood that the situation will improve with regard to inflation and unemployment seems low in the coming years and, therefore, the need to remedy the problem immediately.

The protests are said to be held near government buildings, in public squares and at major crossroads across the country. Given the pathetic situation of the hardships and challenges that ordinary people face, it is likely that an unusually large number of people will participate in the protests.

The JI has threatened to continue such protests on a regular basis until they see visible government action to curb inflation and unemployment.

Pakistan’s employment rate rose from 5.8 percent to 6.9 percent in Prime Minister Khan’s first year in office, according to the Pakistan Bureau of Statistics.

Leaders of various political parties have evaluated the promises and statements Khan made from time to time and how he broke the promises made in the 2018 manifesto.

The evaluations made by various experts indicate that it is not possible to fight against unemployment across borders because the basic conditions to ensure economic stability and a coordinated socio-economic development framework do not exist in the country.

These experts also believe that there has been a significant dissipation of this framework which the government is clearly aware of but unfortunately failed to address.

The problems encountered in different provinces in terms of water crisis as well as electricity shortage only added to the plight of the population. There is deep-rooted frustration and anxiety among people across Pakistan over the prevailing situation.

The government’s efforts to address some of these issues have blatantly highlighted the preferential treatment accorded some provinces over others, prompting reactions from Sindhi and Baloch leaders.

In the given circumstances, the unstable political and security situation in neighboring Afghanistan and its likely repercussions on Pakistan have only aggravated the problem.

After the US withdrew from Afghanistan, Pakistan undoubtedly became the guardian of Afghanistan – albeit politically for the time being.

The economic situation in Afghanistan and any turbulence it may face in the future is bound to have an impact on Pakistan.

In this context, foreign aid and assistance would be crucial for Pakistan to overcome this difficult situation. The United States, on the other hand, was unwilling to leave a space for Pakistan in this regard.

The takeover phase appears to have passed and Pakistan fears that it will be left to fend for itself to resist any negative effects of developments in and around the country.

There are indications that with the emergence of Afghanistan as a critical element in the region’s geostrategic dynamic, most Western countries would tend to view aid to Pakistan and Afghanistan in a comprehensive format. , thus reducing Pakistan’s share.

Pakistan will therefore have to strive to ensure the stability of its economy and make strenuous efforts to get out of this mess.

Disclaimer: This article was posted automatically from an agency feed without any text changes and has not been reviewed by an editor

Waiving interest rates: it is imperative that short-term relief measures do not lead to long-term damage to the economy – BNM