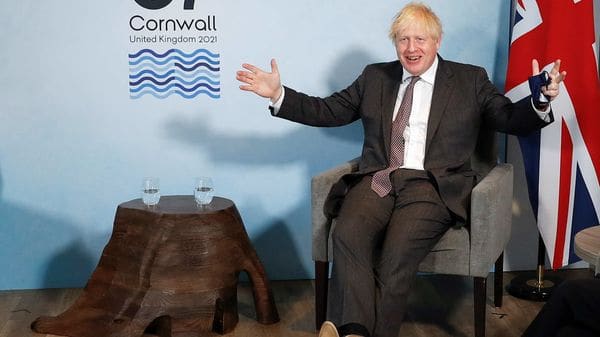 Johnson threatens to suspend Brexit protocol in line with EU

Johnson said on Saturday that Britain could act unilaterally unless the bloc agrees to a compromise when the current grace period governing trade in the region expires on June 30. If a pragmatic solution to facilitate the movement of goods is not found, then the UK is doing “whatever it takes,” Johnson said.

“I think if the protocol continues to be applied in this way, we obviously will not hesitate to invoke Article 16,” Johnson told Sky News on the sidelines of the Group of Seven summit he is hosting this week. -end.

“I have spoken to some of our friends here today, who seem to fail to understand that the UK is one country, one territory,” Johnson said. “I just have to put that in their heads.”

The argument risks overshadowing Johnson’s carefully crafted plans for the first face-to-face gathering of the leaders of the seven major economies since the start of the pandemic. The British leader wants the summit to focus on actions to tackle the coronavirus crisis in the developing world and concrete measures to tackle climate change.

The escalation follows a clearly tense series of meetings with his European counterparts, time is running out to resolve the issue. EU officials confirmed there was strong disagreement behind closed doors. These have now come to light.

For its part, the EU has threatened to retaliate if the UK government breaks the terms of the deal. It remains to be seen whether Johnson will follow through and how far each side is willing to take the war of words.

An EU official briefed on the talks said that even though a pragmatic solution will have to be found, the UK would be wrong to assume that the 27-country bloc will simply forget the protocol. Another EU official said the rhetoric needed to be toned down and member states were aligned.

Article 16 is an emergency trigger which allows each party to intervene and suspend certain parts of the agreement if the application of the protocol creates “serious economic, societal or environmental difficulties”.

Under the terms of the Brexit deal, Northern Ireland, unlike the rest of the UK, remained subject to EU customs and single market rules to avoid creating a visible border with the Republic of Ireland, a decision that could rekindle sectarian conflicts.

â€œI certainly think the protocol is capable of being used and interpreted – by the way, up to the EU – in a pragmatic or theologically draconian way,â€ Johnson said in a separate interview with Channel 5. â€œI don’t I don’t think a trade war is a very sensible or likely path. I just think we need pragmatic solutions. “

The question, as the host, is how far he wants to let Brexit hijack a summit he hoped would showcase Britain’s leadership and present a positive image of the country as a global trading nation after concluding with successful separation from the EU.

Johnson has faced repeated questions about the fallout from Brexit and pressure from US President Joe Biden’s team regarding specific pressures on Northern Ireland.

During his meeting with Johnson, French President Emmanuel Macron firmly told the British leader that he had to honor the divorce agreement he had signed with the bloc, and hoped that a reset in relations between the two parties would s ‘would follow, according to an official.

Even as the French and British sides met, British Foreign Secretary Dominic Raab stepped up his rhetoric against the bloc. Whether the argument gets worse is up to Europeans, Raab told BBC radio on Saturday.

“They can be more pragmatic about implementing the Northern Ireland Protocol in a win-win way or they can be bloody and purist about it, in which case I’m afraid we won’t allow integrity of the UK to be threatened, â€he said.

In the six months since the UK ended its divorce from the EU, relations between the two sides have deteriorated, with a series of arguments over unrelated issues, including the sharing of vaccines, the supply of supermarkets and fishing rights for French vessels in British waters.

The final flashpoint concerns the rules affecting the movement of goods in Northern Ireland. Under the Brexit divorce deal, a trade border was created in the Irish Sea, disrupting supermarket supply chains and sparking violent protests among pro-British supporters in Northern Ireland.

Tensions between the UK and the EU have been mounting for months, with the British criticizing the bloc’s “legal purism” and calling for more flexibility.

In January, the EU nearly triggered an emergency clause in Brexit deals as it rushed a mechanism to restrict vaccine exports with little consultation. Key officials were barely consulted before the move, and this quickly drew criticism across divisions in Northern Ireland as well as from the Irish government.

The measure, which could have seen the reintroduction of controls on the island of Ireland to prevent vaccine doses produced in the block from reaching mainland Britain via Belfast, was withdrawn hours after it was announced – but it has since been used by the UK to justify some of its one-sided interpretations of the Brexit deal.

This story was posted from an agency feed with no text editing.