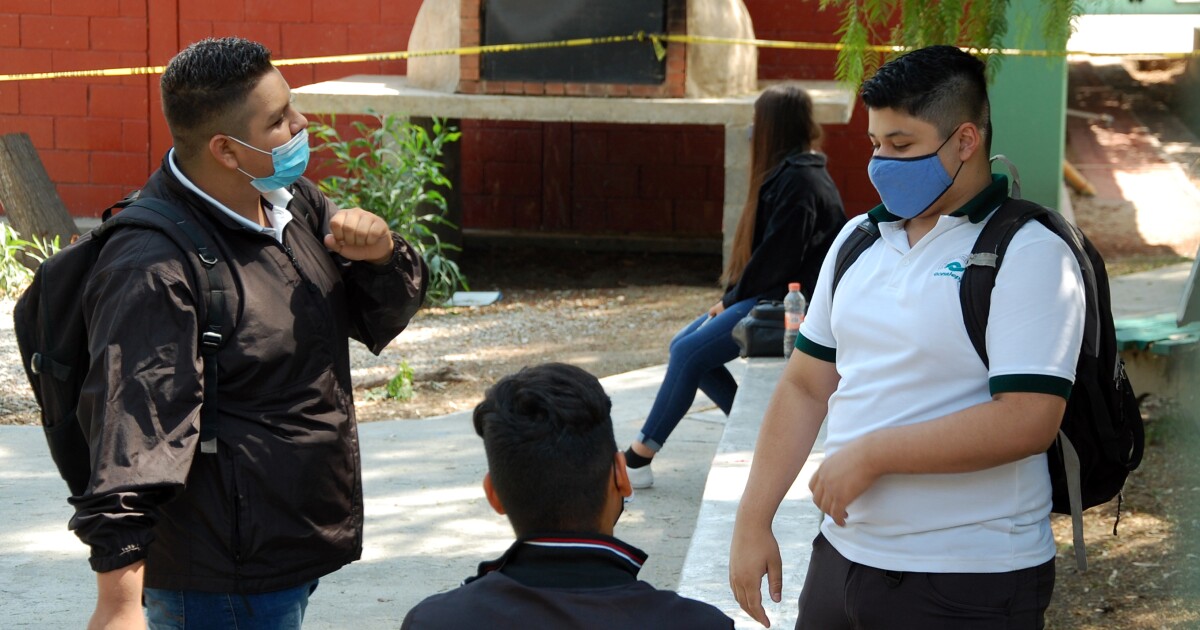 American children aged 12 to 15 began receiving the Pfizer COVID-19 vaccine in May of this year, while in Mexico only those over 18 are allowed to be vaccinated. This despite the approval of the Pfizer vaccine for people over 12 years old by the Federal Commission for the Protection against Health Risks (Cofepris) on June 24.

That’s why, when officials in Baja California presented their back-to-school program this summer – which includes hybrid courses and protocols for identifying symptoms of COVID-19 at home and in schools – ignoring student vaccinations, lawyer Leonardo Abarca reflected on how to defend himself. the rights of his son.

â€œIt does not seem congruent to us that the government claims that minors go back to class in person, even though it is true that they say it is a voluntary act, but children have rights and one of them is the right to education; they have the right to be in school as safe as possible, â€he said.

Abarca argues that since the Mexican Constitution protects everyone in the country, regardless of age, denying children access to the vaccine violates their rights and the international treaties in which Mexico is committed to protecting minors.

Through strategic litigation – which is achieved when legal actions change government public policy – a network of Mexican lawyers are now dealing, free of charge, with legal protection known as “amparo.” With this, parents can receive a court order authorizing the Pfizer vaccine for their children aged 12 to 17.

Abarca said each case is different, but the process usually involves filing the complaint in amparo electronically, while waiting for the district judge to receive the complaint and notification from the defendants.

In the cases that Abarca has represented, judges have issued an order with a place and date for the child’s vaccination or an order for the assessment of the minor’s health. Once that medical assessment certifies that the child is able to receive the vaccine and the assessment is sent to the judge, the order is obtained, he said. So far, he said, no requests have been refused.

Ernestina Morales is the mother of two 13-year-old Mexican students who did not receive the vaccine. The two teenagers are already attending school at least two days a week. She said she decided to send them to school as soon as possible. “Everyone is out and everyone is going on with their lives and mentally for the children, to have them locked up is not good,” she said.

Gabriela de la Fuente has two daughters, aged 12 and 8, who are US citizens and study in Tijuana. She said her eldest daughter received the COVID-19 vaccine in San Diego a few months ago, at her pediatrician’s office. Although the youngest has not been vaccinated, both students are taking classes in person. She says she doesn’t worry about them spending time with other students who haven’t received the vaccine. â€œAs long as they have their masks on and wash their hands, everything will be fine. â€¦ It’s the same for everyone, we parents go to work and we have to learn to live with it, â€she said. She said she felt they were missing a social component of life by not being in school and that she believed mental health was very important, especially for teenagers.

The De la Fuente case illustrates an unspecified percentage of US citizen children who live and study in Tijuana and have non-US citizen parents. She said that despite land border restrictions, she was able to cross to the United States, justifying her visit on a medical basis for her daughter. U.S. Customs and Border Protection have told non-citizens and legal residents that crossing the land border exclusively to get vaccinated does not meet accepted criteria.

Baja California state health official Alonso Perez Rico has said minors will be eligible for the vaccine as soon as clearance is received and doses from the federal government arrive, without specifying a date. He said there are 600,000 children between the ages of 12 and 17 who could be vaccinated once it is cleared and the vaccine is available.

â€œThis is the next group to be vaccinated. We have already finished vaccinating the 18-39 year old group, â€he said.

Among those awaiting a vaccine is Yibram Maytorel, a 15-year-old student from the Conalep Tijuana II campus. After his first day back to school, he said it was way better than video conferencing, even without being vaccinated. â€œI needed a change of scenery,â€ he says. The high school student said he felt safe on campus wearing his face mask and using antibacterial gel, and his absence for so long had frustrated him a bit.

Abarca, who is also president of the Mexican Bar Association of Baja California, believes it is only a matter of time before all minors can be vaccinated in Mexico. In the meantime, he invites parents interested in submitting an amparo or who have questions to contact him by email at [email protected] or by phone at (+ 52-664) 634-3702.