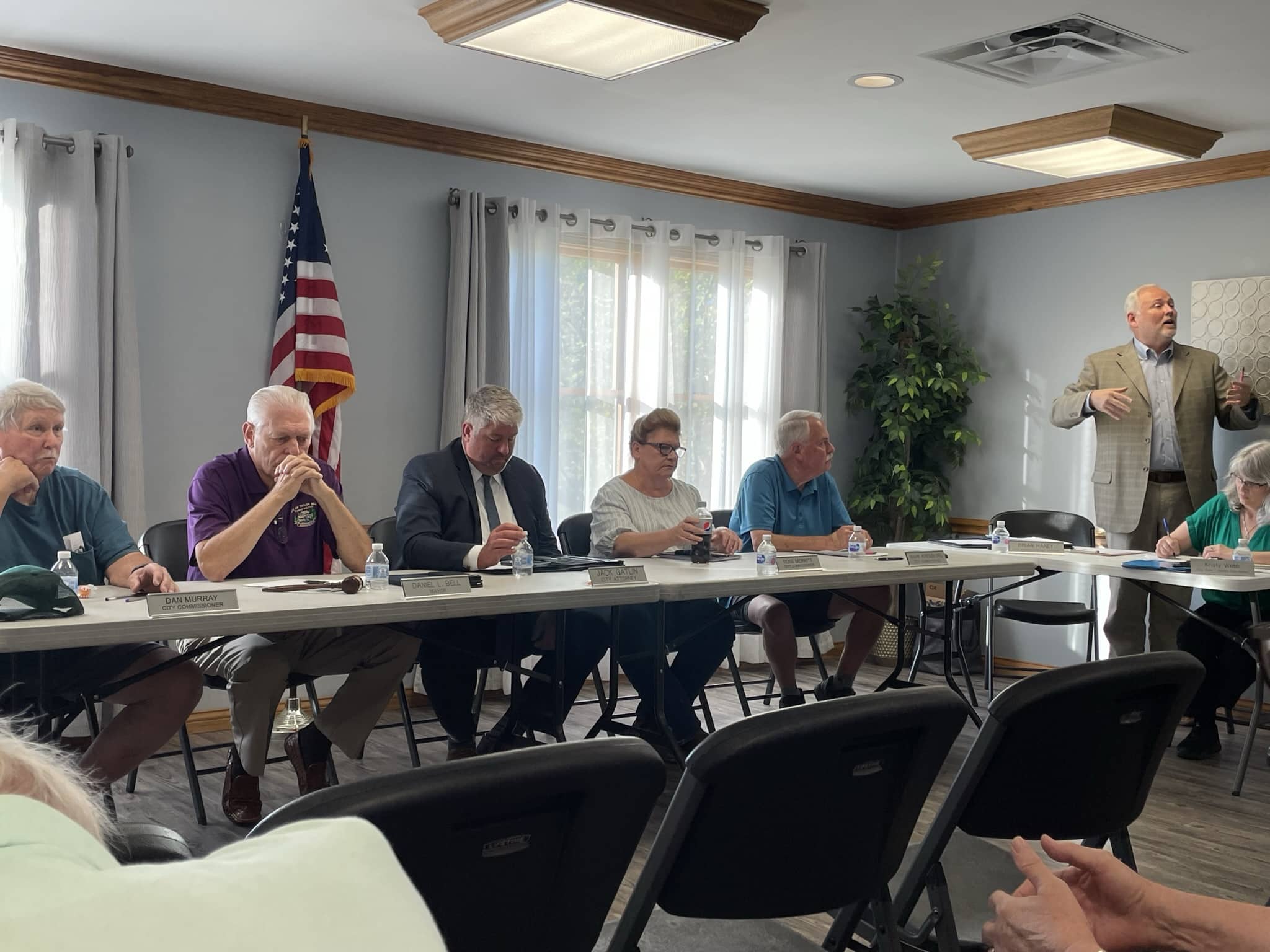 The Taylor Mill fire station is in disrepair, and city officials have urged residents to tell them what they think the city should do about it.

On August 30 and September 3, there were open houses at the fire station and about three to four dozen residents came to take a look. Fire Chief John Stager and Deputy Fire Chief General Fernbach were on hand to show people around and point out some of the major flaws.

“When it was built it was perfect,” Fernbach said. “There is a good dormitory, kitchen area and living room. Everything else is a bonus for me. You know, (firefighters) live here every three days. They spend a third of their life there. If you ask me for priorities, it’s mostly for the guys.

On Wednesday, the municipal commission held a special meeting devoted to the subject of the fire station.

“We’ve been talking about the fire station since 2020, there are issues with the structure of the building, so the commission has four choices on the table they’re considering,” City Administrator Brian Haney said. “They will either try to repair the existing structure, and there are guidelines and recommendations from our engineers. They’re going to look at possibly building a second fire station on the back of the bays, so reuse the bays and knock down the front, or go to a third location, which is on property the city bought out around 2010, and build a new fire station there. The fourth option is to do nothing. So the commission tries to decide whether they should do something, and if they do something, how much do they want to spend.

“I think we have a fifth choice,” commissioner Mark Kreimborg said. “We can also talk to another agency about contracting or merging with another fire department.”

The problems with the fire station are many. The facade of the building which houses the offices, the living rooms, the kitchen and the day area, the laundry room and the technical room, is collapsing, causing structural problems. Last year the roof was fixed which fixed some of the water leaks but the 4 inch brick walls are porous and when it rains the bricks ooze water which that affects drywall. Stains on ceiling tiles and drywall are very noticeable. There is asbestos inside some of the walls, which sag with age and weight, and although the city has taken care of mold issues, due to the porous nature of the brick , there is always the specter of mold, and it should be cleaned up as soon as it is identified. The walls and casing around windows and doors are unsightly, officials said.

A major concern is that there is no defined hot zone, where firefighters can enter with their equipment after fighting a fire and be able to remove carcinogens from their clothing before entering the quarters. of dwelling. Firefighters get rid of their gear and put their thick coats and pants in a residential-size washer and dryer that’s also used for regular clothes and towels. The washer they use was found in the basement of the community center and put into use, but there should be an industrial washer specifically for firefighter gear due to the carcinogens associated with firefighting. Another regular washer and dryer can be used for clothes and towels, but it is essential by state standards to have separate equipment for equipment and a differentiated area for people wearing this equipment .

The city has approved a $53,000 facility assessment by CT Consultants, the city’s engineers, which outlines the various problems and the cost of fixing them. In 2021, 20 recommendations attempted to repair the fire station at a cost of $730,600 presented to the commissioners, and initially they voted to address 12 of the concerns, but then the Covid pandemic hit and prices rose rapidly. Commissioners then began to doubt the efficacy of paying so much for what some considered band-aids when they could be considering building a new fire station.

At the public hearing, there were 11 speakers out of the approximately three dozen people present.

“I think we need to align our resources with our needs, because we don’t have the money to spend on a new fire station,” Stu Bowns said.

He pointed out that additional government funds during Covid have been set aside and used, so future income will be stable. He also reviewed the funds taken over the past three years from the city’s roadside fund, concluding that next year the city will only have $13,000 to spend on city roads, and he said that was not enough.

Haney said that since they only get $120,000 from the state for road repairs, they always take money from the road repair fund, and that fund gets canceled at the end of the year. the year and refinanced the following year, since the city typically spends around half a million on the streets each year.

Rich Meyer said he had always been a supporter of a new city building, but no commissioner since 1990 wanted to go into debt for anything, so the city building didn’t have just getting a makeover. However, the cost of a new fire station prompted him to step back.

“We have to get our house in order, especially when we are going to borrow money,” he said.

Lt. Charles Riley, who is a firefighter/paramedic at Taylor Mill, had a different opinion.

“I love working at Taylor Mill,” he said. “It’s our life, in this building, it’s nine livelihoods. We use the same washer and dryer for everything. We appreciate the raise the city has given us, but I ask you to think of us, living and working in this building.

Both Ed Kuehne and Ed Kreimborg thought the city had wasted the $53,000 spent getting the facility assessment.

“We need a fire station!” Kuehne said. “But we have to have it rebuilt!”

Tom Koehler thought the estimates of $7.6m to fix the building and $9.3m to build a new fire station were ‘outlandish’, further citing $66,000 for a new HVAC system for 1800 square feet and $44,000 for lighting. He told the commissioners that it was not Christmas and that they should look at needs rather than wants, and he thinks the fourth bay should be turned into a “hot” area for firefighters.

Mike Blackburn, who is running for mayor against incumbent Dan Bell, said he wishes the city could have whatever it wants, but that’s not feasible with the money the city has.

“They need a maintenance building much more than we need a fire station,” he said. “The maintenance department has a building that’s been condemned for 8 to 10 years, right?”

Receiving an affirmation, he then asked the commission why they hadn’t tried to buy an older medical building that was available, or any other building they could have used instead of finding themselves in the desperate situation in which they are now.

Most comments were about the amount of money offered to fix or build new ones, but the consensus, if any, was that something needed to be done, and people want the city to fix what they have. The “let’s do it” attitude has been very strong in the city and was the main thinking element that defeated the movement to build a brand new campus of urban buildings in 2010.

Steven Smiley had a more professional view of the situation.

He produced news articles about what had happened in other cities when managers didn’t listen to what employees said they needed.

David Volz asked what was the point of being a city if it couldn’t provide fire and police cover.

“It’s a tough time for me, understanding the financial responsibility of the city and not just the needs of the station, but the needs of our firefighters,” Stager said. “It’s their home for a third of their life.”

He said when he was hired in 2010, he was told an idea that in two years the city planned to build a new campus that would house fire, police and administration.

“It was a great recruiting tool,” he explained. “We are now, twelve years later, and we do not have such a tool to recruit.

Departments throughout the Northern Kentucky region consistently campaign for and retain quality employees, Stager said. While he understands the economic constraints the city is facing, Stager said trying to attract and retain current employees with fairly competitive salaries but nothing else, like a larger station, is difficult. recent and modern appliances.

“When you’re visiting the station with potential new employees, it’s hard to hide the fact that the building has issues,” Stager explained. “These issues have been discussed during my tenure as Fire Chief and some progress has been made. I will continue to be an advocate for the department by maintaining an open and progressive dialogue for station, equipment and personnel needs, while being mindful of my financial responsibilities as Fire Chief.

The next step in the process is for commissioners to discuss the options at the monthly caucus meeting on Sept. 28 at 10 a.m. The public is invited to attend this meeting.

The issue will not be discussed at the regular committee meeting next Wednesday.

Top 5 Benefits of an Instant Loan from Paysense Partners