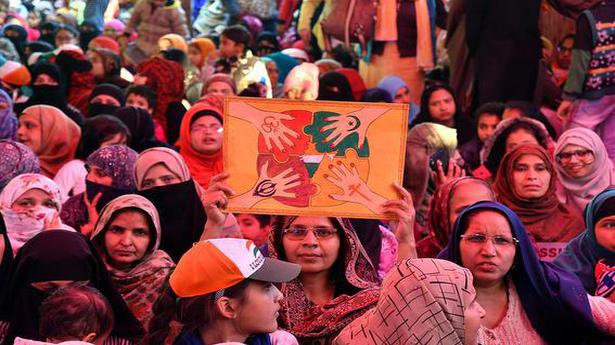 Transcending Borders and Borders – The Hindu

The areas of peacebuilding and protest are generally seen as occupying separate and discrete worlds. However, in women’s movements in South Asia, from the 1980s onwards but more visibly in the 1990s, these became more and more intertwined as academics and activists forged cross-border synergies and solidarities. .

Feminist icon Kamla Bhasin, who died in September, largely contributed to this outcome. She has invested her unique creative energy to transcend frontiers and frontiers, past monocultures of the mind that reinforce stereotypes, mistrust and militarism, and reflect the cartographic anxieties of nation states.

Bhasin said: “Principal sarhad by khadi deewar nahi, us deewar by padi daraar hoon [I am not the wall that stands at the border, I am the crack in that wall]”. It captured the spirit with which women oppose ‘resolutions’ in South Asia, often in the face of strong opposition, cobbled together around cords of territoriality to join forces and mobilize across the country’s fault lines. , caste, religion, class and gender.

The recognition that South Asian women face a continuum of violence – both structural and overt – as they confront the patriarchs of family, community and state, and ” complicity between them â€, supported networks not hindered by national identities.

Bhasin’s book with Ritu Menon, Borders and borders, and that of Urvashi Butalia The other side of silence, both published in the 1990s, were innovative in their accounts of the tales of pain, loss, displacement and violence that the partition of India had inflicted on women on both sides of the border and the similarity of their experiences . This work revealed how community, even national, honor was embedded in women’s bodies and the gendered nature of citizenship. It sparked explorations of what country, religious identity, or even nation really meant to women. It has also opened up the space for research and activism that questions the â€œsanctity of bordersâ€.

Several ethnographic narratives that have given voice to the singular experiences of women in conflict situations – in Bangladesh, Sri Lanka, Nepal, Afghanistan and Pakistan – have been added to the repertoire, enabling cross-cutting civil society engagements to across South Asia around issues of justice, rights, patriarchy, militarization and nuclearization.

During times of confrontation between different governments and their neighbors, especially between India and Pakistan, feminists like Bhasin have worked hard to ensure that people-to-people contact and some form of public diplomacy support dialogue and nurture synergies. Whether they are inspired by the theoretical articulations of â€œtrack twoâ€ (invented by Joseph V. Montville in 1981) or â€œmultitrack diplomacyâ€ is difficult to establish. In any case, this â€œdiplomacyâ€ avoided Henry Wotton’s prescription to â€œlie abroad for his countryâ€. It was clearly a question of speaking collectively about the truth in power.

With women in mind, initiatives like the Women’s Action Forum (WAF) in Pakistan who contacted their sisters in Bangladesh to apologize for the atrocities committed by the Pakistani military in 1971; the Women’s Peace Bus undertaken by the Women’s Initiative for Peace in South Asia (WIPSA) from Delhi to Lahore in 2000 to demand a war-free and nuclear-free South Asia; Women in Security Conflict Management and Peace (WISCOMP) bringing together young South Asians for workshops on conflict transformation; the Regional Women’s Network (WRN) with its sustained campaigns against militarization and human rights; and Sangat with its innovative regional gender training conclaves, to name a few, has persevered in the mission of expanding constituencies for peace.

In recent decades, South Asia has witnessed collectives of â€œdisobedient womenâ€ voicing peace and challenging state notions of security and order. They were visible in the movements of mothers in Sri Lanka, Didi Bahini in Nepal, the Force Thappa in the “Malki ya Maut [ownership or death]Farmers are struggling in Pakistan, and in the Chipko, Narmada, Bhopal and Kudankulam movements in India. Events like the Meira Paibis (women with torches) in Manipur, the women’s congregation in Shaheen Bagh and the farmers’ protests are also part of these traditions of dissent.

Drawing on the experience of activists like Bhasin making a woman’s place “in the resistance”, these movements have largely entered the arena of peacebuilding through the corridors of human security – expressing democracy and claiming citizenship.

At the heart of their commitment

Highlighting the tensions between personal security and what often passes as national security, opposition to war and cultures of militarism have been central to their engagement, aware of the tension between what often passes as national security and the security of peoples, livelihoods and beliefs, including food and water security. At the forefront is also the need to link peace and security issues to development in order to tackle the structural causes of violent conflict.

Feminist scholars have often made connections between formal security discourse and certain types of hegemonic masculinity, and how political priorities and (techno) strategic discourse are skewed to preserve power hierarchies at the national level, within the international system and of the world economic order. For them, the â€œrationalâ€ calculation of power, so characteristic of international realpolitik, cannot be â€œredeemedâ€ in the service of peace.

Women’s movements have questioned the conventional metaphor of the peace of the figure in white, passively holy or totally passive. To conduct the conflict in a non-violent manner, to transgress received notions of security, in their daily resistance against injustices and oppressive socio-political institutions to build structural peace, was their cry of alarm.

The feminist â€œweaponsâ€ they bring to their engagement mix the cerebral, the festive and the performative. Bhasin herself, with her extraordinary communication skills, has attracted a large number of young enthusiasts, “unfolding” slogans and art, music and humor, making her primers succinct and accessible on the web. gender, patriarchy and peace resonate across groups, while unboxing the most complex of feminist conceptions.

This practice of peace with dissent and nonviolent activism at its core that connected the personal to the political, often uses spectacular forms of protest and brings everyday items from the private sphere of women as children’s toys, diapers, rolling pins, clothes, veils and sometimes even female bodies in public space, similar to what Mahatma Gandhi did with khadi and salt. These forms of protest are harmoniously inspired by the collective global palimpsest of feminist activism chiseled by ancestors around the world.

Feminist peace activists today recognize that finding common ground involves recognizing differences while building on commonalities. Women’s experiences of conflict and violence are mediated by their â€œlocationâ€ and the intersectionality of caste, class, region, religion and gender. Even though women â€œspeakâ€ the language of inclusion and connectedness, they are not a homogeneous category with an identity that trumps all other affiliations. This poses a particular challenge in the mobilization for peace. Bhasin’s genius lay in his ability to overcome these various loopholes and create diverse coalitions and communities of practice – from grassroots workers to minorities, men and boys, Dalits, academics, students and international networks. His signature tune, “Azadi [freedom]”, Also called the” other walls “- the psychological barriers of suspicion, fear, deception, and above all an” other “that can only be countered by” putting yourself in the other’s shoes. perceived â€- reaching out to those you fear the most loathsome stereotypes to touch at the heart of the complexity.

Since the mid-1980s, South Asian activists have sought to “engender” peace by attracting even more “hostile” neighborhoods to safe and empathetic “unarmed” spaces of trust, much like practitioners of peace. the Aikido. With friendship and community as their anchor and resilience, they chose to “sweat in peace rather than bleed in war.”

This was long before the landmark United Nations Security Council (UNSCR) resolution 1325 in 2000 established the global normative model of the Women, Peace and Security Agenda (WPS). It also preceded the adoption of feminist diplomacy by Scandinavian countries and the Hillary Clinton doctrine urges that women’s rights and violence against women be considered issues of national security.

Did feminist activism for peace in South Asia then offer crucial conceptual alphabets to the international model on positive peace (peace with justice) as an inclusive public process, and not just ‘negotiated’ in negotiations closed only by men? The story of their founding contributions to the WPS discourse needs to become more visible.

The peace of a people is a perpetual work, checked and tested every day. It is also an invitation to civil society to constantly refine the song of democracy.

Nurturing a South Asian identity was Bhasin’s labor of love. With love, she tried to make him part of the lives of others. And she did it, as we all must, with “passion, compassion, humor and style.”

Meenakshi Gopinath is President of the Center for Policy Research (CPR) and Director of Women in Security, Conflict Management and Peace (WISCOMP), New Delhi