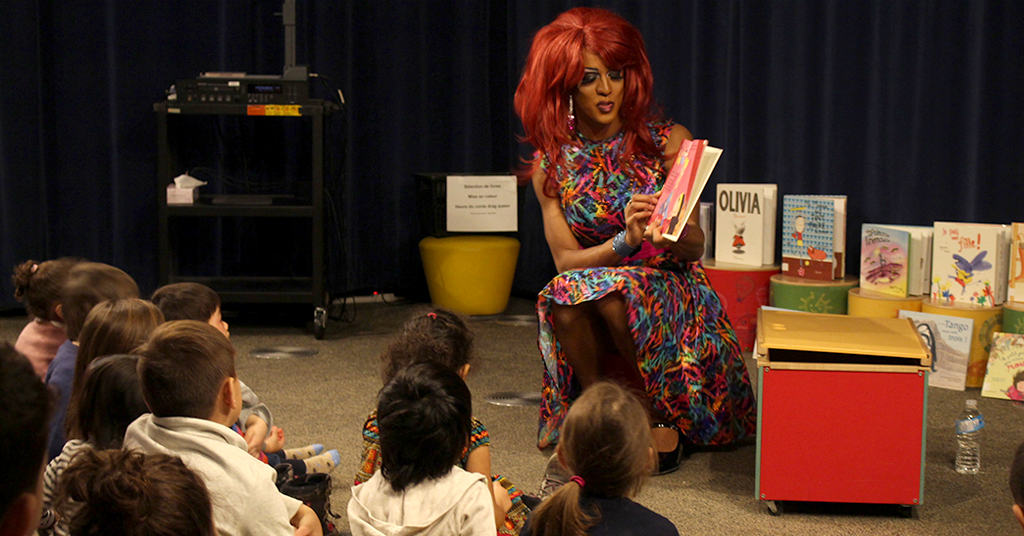 Family drag queen storytime events across Canada continue to be the subject of a dangerous wave of bigotry as protesters with links to the “Freedom Convoy” and hate groups using homophobic rhetoric to stir up fear about the 2SLGBTQ+ community.

For the past two weeks, far-right organizers have attempted to shut down drag queen storytime events in Winnipeg and Saskatoonthe latest in a series of online protests and opposition to other storytime events across Canada.

Several of these protests were organized through convoy-related channels on Telegram, a social media network popular with the far-right, a Radio-Canada investigation revealed earlier this year.

Many organizers promote conspiracy theories and use homophobic rhetoric equating LGBTQ people, and trans people in particular, with “groomers” and pedophiles.

According to Canadian Anti-Hate Network, “charges of ‘grooming children’ have historically been used to alienate members of the 2SLGBTQ+ community from professions like teaching. These accusations, however, have never diminished within the far right, which has long branded its ideological and political foes as paedophiles.

In Winnipeg, far-right organizer and school board candidate Patrick Allard encouraged supporters to demonstrate peacefully Drag Queen Story Time Event at a local cafe on October 29. Allard has been a key organizer of several protests against COVID-19 restrictions and has previously promoted the work of Action4Canadaa Christian nationalist group currently organizing against 2SLGBTQ+ resources in schools.

Far-right organizer and local school board candidate Todd MacDougall also encouraged his followers to protest the Drag Queen Story Time event on his Winnipeg Alternative Media Facebook live stream. MacDougall participated in the convoy occupation in Ottawa and previously identified himself as a proud boy – a group that has been designated as a terrorist entity in Canada.

Winnipeg 2SLGBTQ+ organizers and supporters have since planned a Drag Hour Host Committee rally together to ensure that the story time event runs smoothly and safely.

“One of the common threads of gay, trans and queer liberation is the fight against silence, shame and ‘the closet,'” Grant said. “Drag is perhaps the antithesis of that! Drag is a celebration of queer pride, joy, intensity and resilience! »

Harassment campaigns of visible members of the 2SLGBTQ+ community are just the latest attempts to push 2SLGBTQ+ individuals back into the closet.

“The people and groups who organize and employ this hate are nothing new, they just found a problem that they believe has enough impact to be generalized,” Grant said.

“Trans people, drag artists and especially 2SLGBTQ+ youth are the most visible targets and are at the center of their hate campaign.”

These reactionary campaigns are also used as “a wedge to divide communities”, Grant added. “We need people to see this, stand up and call it out.”

“Much like the birth of gay liberation in the 60s and 70s, and the HIV/AIDS crises of the 80s and 90s, we will continue to stand up for the safety, dignity and rights of our communities and families.”

In Saskatoon, Mark Friesen, an organizer of the Freedom Rally deeply rooted in far-right communities drew Pay attention to a Reading with Royalty drag queen event for all ages Facebook on October 16 and linked him to conspiracies involving the UN and the World Economic Forum. Popular convoy-related Facebook groups like Slow Roll Saskatoon and Saskatchewan Freedom Revolution also promoted conspiracies about the event and encouraged members to protest.

Friesen’s post was shared by Daryl Cooper, a Saskatchewan-based society organizer Unified base who has links with Christian nationalist revival groups. Cooper resigned as the Saskatchewan Party candidate in 2020 after PressProgress reported on his story on social media engaging in Q-Anon conspiracies.

Despite this, only 15-20 far-right protesters showed up for the event, although two were wearing branded clothing. Diagolona far-right movement associated with militant accelerationism. They outnumbered nearly 200 2SLGBTQ+ supporters and there was no violence.

Drag Queen Story Time events have also been widely targeted by the far right across the United States. Far-right protesters recently brought guns and other weapons at an event in Oregon that resulted in violence.

We are an award-winning non-profit news organization that covers topics such as social and economic inequality, big business and unions, and right-wing extremism.

Help us build so we can shine a light on stories that aren’t getting the attention they deserve from Canada’s mainstream corporate media.

The CURO Group (CURO) will publish its results on Wednesday