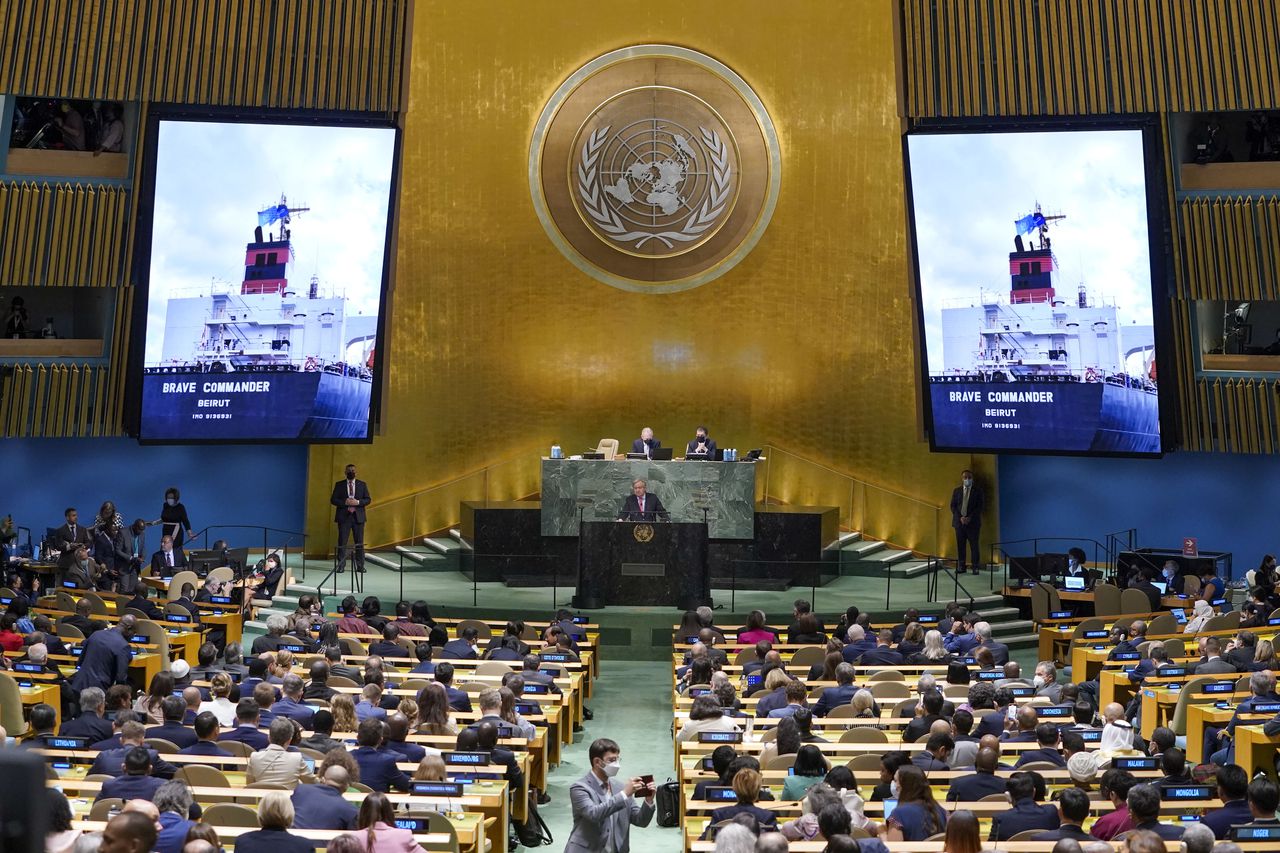 UNITED NATIONS – In an alarming assessment, the head of the United Nations warned world leaders on Tuesday that nations are “stuck in a colossal global dysfunction” and are not ready or willing to meet the challenges that threaten the future of the world. humanity – and that of the planet. “Our world is in peril – and paralyzed,” he said.

Speaking at the opening of the annual high-level meeting of the General Assembly, Secretary-General Antonio Guterres insisted that hope remained. But his words reflected a tense and worried world. He cited the war in Ukraine and growing conflict around the world, the climate emergency, the dire financial situation of developing countries, and setbacks to the UN’s 2030 goals, including ending extreme poverty and quality education for all children.

He also warned of what he called “a forest of red flags” around new technologies despite promising advances in curing diseases and connecting people. Guterres said social media platforms are based on a model “that monetizes outrage, anger and negativity” and buys and sells data “to influence our behavior”. Artificial intelligence, he said, “undermines the integrity of information systems, the media and even democracy itself.”

The world does not even have the beginning of a “global architecture” to deal with the repercussions caused by these new technologies due to “geopolitical tensions”, said António Guterres.

His opening remarks came as world leaders gathered at UN headquarters in New York after three years of pandemic hiatuses, including an all-virtual meeting in 2020 and a hybrid meeting last year. This week, the halls of the United Nations are once again filling with delegates reflecting the cultures of the world. Many faces were visible, although all delegates are required to wear masks except when speaking to ward off the coronavirus.

Guterres made sure to start by sounding a note of hope. He showed a picture of the first UN-chartered ship carrying grain from Ukraine – part of the Ukraine-Russia deal that the UN and Turkey helped broker – to the Horn of Africa, where millions of people are on the brink of starvation. is, he said, an example of promise and hope “in a world teeming with turmoil”.

He stressed that cooperation and dialogue are the only way to maintain world peace – two fundamental principles of the UN since its founding after World War II. And he warned that “no power or group alone can make the decisions”.

“Let us work together, as a coalition of the world, as a united nation,” he urged the leaders gathered in the vast hall of the General Assembly.

“The divergence between developed and developing countries, between North and South, between the privileged and the less, becomes more dangerous every day,” the Secretary-General said. “He is at the root of the geopolitical tensions and lack of trust that poison all areas of global cooperation, from vaccines to sanctions to trade.

Before the global meeting opened, leaders and ministers wearing masks to avoid a COVID-19 super-spreading event wandered the meeting room, talking individually and in groups. It was a sign that despite the fragmented state of the planet, the United Nations remains the key gathering place for presidents, prime ministers, monarchs and ministers.

Nearly 150 Heads of State and Government are on the latest list of speakers, with a high number indicating that the United Nations remains the only place not only to express their views but also to meet in private to discuss challenges. on the global agenda – and hopefully make some progress.

The 77th meeting of the General Assembly of world leaders meets under the shadow of Europe’s first great war since World War II – the conflict between Russia and Ukraine, which sparked a global food crisis and opened fissures between the great powers in a way not seen since the Cold War.

Top of the agenda for many: Russia’s February 24 invasion of Ukraine, which not only threatens the sovereignty of its smaller neighbor but raises fears of a nuclear disaster at Ukraine’s largest nuclear power plant. Europe in the southeast of the country, now occupied by Russia.

The leaders of many countries are trying to prevent a wider war and restore peace in Europe. Diplomats, however, do not expect any breakthrough this week.

The loss of important grain and fertilizer exports from Ukraine and Russia has triggered a food crisis, particularly in developing countries, as well as inflation and the rising cost of living in many many others. These issues also feature prominently on the agenda.

In an impassioned speech to the Assembly, French President Emmanuel Macron said no country can stand aside in the face of Russian aggression. He accused those who remain silent of being “somehow complicit in a new cause of imperialism” that tramples the current world order and makes peace impossible.

Brazilian President Jair Bolsonaro, traditionally the first speaker, called for an immediate ceasefire in Ukraine, the protection of civilians and the “maintenance of all avenues of dialogue between the parties”. He opposed what he called “one-sided or one-sided” Western sanctions, saying they have hurt economic recovery and threatened the human rights of vulnerable populations.

Senegalese President Maky Sall, who chairs the 55-nation African Union and later took to the podium, called for “de-escalation”, a cessation of hostilities and “a negotiated solution to avoid the catastrophic risk of ‘a potentially global conflict’. He called a “high-level mediation mission” and said the union was ready to help.

King Abdullah II of Jordan said the pandemic, exacerbated by the crisis in Ukraine, has disrupted global supply chains and increased hunger. Many affluent countries experiencing empty food shelves for the first time are “discovering a truth that people in developing countries have known for a long time: for countries to prosper, affordable food must arrive at every family’s table,” he said. he declared.

“Globally, this requires collective action to ensure equitable access to affordable food and to accelerate the movement of staples to countries in need,” Abdullah said.

The death of Britain’s Queen Elizabeth II and her funeral in London on Monday, which many world leaders attended, created last-minute headaches for the high-level meeting. Diplomats and UN staff have scrambled to cope with changes in travel plans, the calendar of events and the logistically complex schedule of speeches by world leaders.

There is an exception to in-person speeches. Despite objections from Russia and some allies, the assembly voted last Friday to allow Ukrainian President Volodymyr Zelenskyy to pre-record his speech for reasons beyond his control – “the ongoing foreign invasion” and the military hostilities that force it to carry out its “national defence”. and security tasks. His speech will be broadcast on Wednesday afternoon.

The US president, representing the host country of the United Nations, is traditionally the second speaker. But Joe Biden attended the Queen’s funeral, and his speech was pushed back to Wednesday morning.

Edith M. Lederer of the Associated Press wrote this story. Lederer is the chief UN correspondent for the Associated Press and has covered international affairs for more than half a century. For more AP coverage of the United Nations General Assembly, visit https://apnews.com/hub/united-nations-general-assembly